The subject line of the email from the editor of Penn Appetit read simply “Dessert Competition Saturday!” Relishing any opportunity to bake, I didn’t need any further convincing to enter the contest. Reading on, I discovered the judging criteria to be taste, appearance, and creativity. Although I wasn’t hoping or even trying to win, I’m a naturally competitive person (insert Wharton joke here) and so thought that my creativity could help differentiate me from the others. Namely, I was certain that if I made a Russian dessert, there would be little chance that anyone else would think to make the same thing.

I tried to think of my favorite Russian sweet that my mom and grandmother had baked me. The scharlotka, an apple cake, came to mind, as did the Napoleon, the Russian version a creamier and moister variation of the French classic. But these two desserts, although beloved by me, seemed to be too ‘classic’ and not quite interesting enough for the competition. I thought back to the almost dozen summers I spent living with my grandparents in their home in Russia. When I accompanied my grandmother on her weekly grocery shopping excursions, we would walk all around the city visiting various different shops – the butcher, the open-air vegetable market, a vendor selling canned goods, the fish store, and finally the bakery. At the bakery she would buy us a couple loaves of the traditional dense black rye bread, and if I was lucky, she would also buy me a sweet treat or two. Whenever she succumbed to my begging and pleading, my first choice would always be the schokoladnaya kartoshka, or chocolate potato.

This dense, rich, and intensely chocolaty pastry doesn’t have any potato in it but is shaped to look like one, with nuts poking out to look like its sprouts. The walk home always seemed excruciating long, as I couldn’t wait to dig into my dessert. Sitting in my grandmother’s tiny kitchen, in between sips of black tea, I would enjoy spoonfuls of the moist chocolate ‘potato.’ I haven’t eaten this uniquely Russian dish for years, since the last time I was in Russia was more than 4 years ago. I decided the dessert competition would be the perfect opportunity, or excuse, to attempt to recreate my favorite childhood dessert.

Following a few internet searches, I found that the ‘potato’ was made rather simply: chocolate icing mixed with cake crumbs. Excited that I stood a fairly good chance of accurately recreating this childhood memory, I bought the necessary ingredients and set about baking. Although I ALWAYS bake my cakes from scratch, since the recipe called merely for cake crumbs, I decided to use a store-bought package of yellow sponge cake mix. I wanted the ‘potato’ to have an intense chocolate flavor, so I added a quarter cup of cacao powder to the cake mix before baking. Next, I made the chocolate icing, mixing first equal parts creamed butter and condensed milk. Finally, I added a few ounces of melted bittersweet chocolate and a couple of teaspoons of vanilla extract and mixed it all together to form the icing. Once the cake had baked and cooled, I crumbled it to form crumbs and combined it with the icing. To sculpt the finished ‘potatoes,’ I rolled several tablespoons of the cake crumb-icing mixture into balls, dusted them with cacao powder, and rolled them in chopped pecans. Finally, I was ready to taste my creations to see if they lived up to my expectations.

Although not as dense and rich as I had remembered, my recreation of the schokoladnaya kartoshka was still satisfying, every mouthful moist and flavorful. The taste and feel of the dessert made me think back to all of those summers I spent with my grandmother, helping her on her weekly grocery expeditions. Now, I can’t wait until she comes and stays with my family again later this year, so I can share my version of this dessert with her.

My grandmother in her kitchen in Russia. 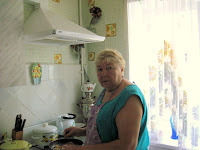