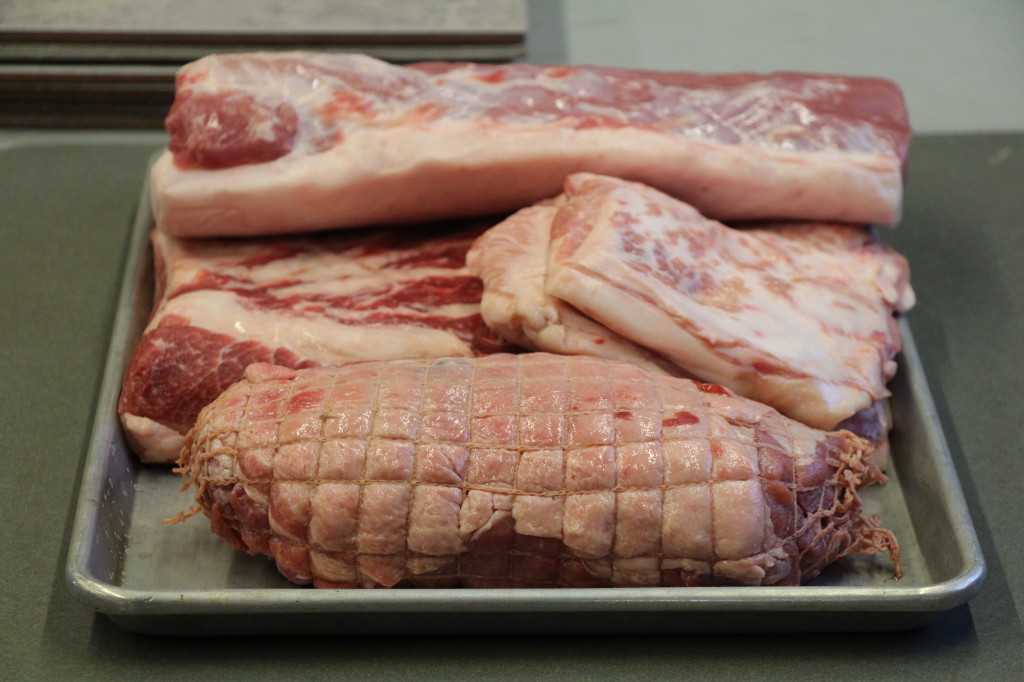 What’s the difference between pastured pork and the meat you see at the supermarket? What are some of the health and environmental benefits of eating pastured, heritage breed meat? And how do fresh cuts of meat turn into cured delicacies like lomo and capicola?

Fair Food and its esteemed guests from Stryker Farm and Rooster St Provisions were able to answer those questions and more this past Sunday, March 23, 2014, at Fair Food’s monthly education workshop. Attendees crowded into the Rick Nichols Room at Reading Terminal Market, eager to learn more about pastured pork and charcuterie.

Beer and cider from Philadelphia Brewing Co. and Commonwealth Cider were on hand for attendees to sip throughout the workshop.

First up was farmer Nolan Thevenet of Stryker Farm, who shared what sets pastured, heritage breed pork apart from the pork we normally encounter. A heritage breed pig refers to one that hasn’t been changed by humans in the last 50 years. Nolan started a farm raising pigs in an alternative outdoor pasture environment: an independent, contract-free business model with low volume, high labor costs, and high quality pork.

There are two other business models. One is indoor confinement, characterized by extremely cramped living conditions (8 sq. foot/pig), hybridized pigs raised for fast growth, and the use of antibiotics. Indoor deep bedding provides more individual space per pig, and doesn’t use antibiotics in the pigs’ food. This is used for third party purchases such as Niman Farms and Whole Foods. In comparison to these two models, Thevenet’s model provides the most personal investment in each pig.

Thevenet started his talk by describing his unusual path to a farming career. He attended three different universities (including our UCity neighbor Drexel) before dropping out and deciding to start a pig farm. It wasn’t something he had planned for awhile. Rather, Thevent knew he was tired of the traditional classroom setting and wanted to try something involving the outdoors.

In 2010, his parents threatened to kick him out, but relented when he claimed he was planning to go work on a chicken farm, allowing him to use their property for his farming endeavor.  Much to their chagrin, Thevent purchased six pigs and a few goats, although he soon had to pass off the goats since the pigs and goats were eating each others’ food. He had originally planned to cut down the pine trees in his area, sell the wood chips, then raise goats, but realized this would not be lucrative. On his 42-acre family-owned property in the Poconos, he built a shed to house the animals.

Thevent had no relevant experience in farming, animals, or a combination of the two. He did the necessary research in order to teach himself how to raise the pigs. “You’d be amazed and what you can find on Google and YouTube,” joked Thevent.

His operations grew steadily. Thevenet started selling his products at farmers’ markets and grew his customer base by starting a website. Today, his business has reached a breakeven point, which is impressive given how labor-intensive farming is. He still runs the business solo, joking that he doesn’t have much of a social life.

Thevenet invests personal time and effort into raising each pig, even feeding some by hand with a bottle. Therefore, it’s always difficult for him when 8-9  months pass and it’s time to slaughter the pigs. He slaughters 8 pigs every other week, totaling 180 pigs in a year.

He fed his original 6 pigs 1,000 lbs. of fresh produce every week, which was donated by a nearby restaurant. However, as his business grew, Thevenet noticed that they were not gaining weight quickly, and switched them to a natural diet involving more grains and carbohydrates.

While telling his story, Thevenet provided the first sample of the night. He served one of his prepared foods that he now  sells: Stryker Farm’s pulled pork with Phil’s BBQ sauce, generously portioned on a crusty slice of baguette. Sweet and tangy, the pork could be clearly differentiated from any other pulled pork we had tried. You could taste the love in each bite.

When asked about projected growth for his business, Thevenet didn’t have an answer. Nonetheless, as word spreads about his products, it is likely that he will continue expanding his farm.

After Thevenet, we got the scoop on sustainable charcuterie like lomo and coppa and learned how to make our own at home with a demo and tasting from chef/butcher Tony Page and his wife Kristina of Elizabethtown, Pa.’s Rooster St Provisions.

They started off providing a bit of a background on their story. The husband-and-wife couple both came from families of hunters, and Page had a background in the restaurant industry. On a trip to Europe, the duo loved all the charcuterie stores. They knew they wanted to switch from taxing careers involving crazy sleep schedules and limited together-time, and wanted “to focus on something they really loved.” The couple decided they were young and crazy enough to start one of their own. Today, they have been running Rooster St Provisions for nearly 2 years, and 2 months ago, hired additional help. Rooster St Provisions prides itself on purchasing whole animals to butcher, and 60% of its sales come from fresh cuts of meat.

In the demonstration, Page covered four different cuts: lomo (pork loin), basic ham, guanciale (pork jowls), and bacon, and provided tips on the butchering and curing process along the way.

While preparing the lomo, Page explained the curing process. According to lomo, good curing starts with good butchering. Page can butcher 3 pigs from start to finish in 6 hours, and recommends using large, clean surfaces to ensure smooth cuts. Page tries to avoid leaving any sort of unnecessary holes or nooks, since mold can grow in these areas.

Page showed how to rub the meat, then wrap it. For the curing process, he prefers the method of measuring salt beforehand, adding it to the meat, and placing it in a cooler for the necessary amount of time. His rule of thumb is 1 day for each 3/4 lb. of meat he is curing. He added that the biggest mistake one can make is pulling the meat out of the cure before the salt reaches the center; this can make the pose health-risks for consumption.

For the lomo specifically, Page put it in between trays and pounded it flat with 1 lb tiles. He was a big fan of ratios, and recommended pounding with 1 lb of tiles per pound of meat.

The final product was salty, savory, and very satisfying.

Next up was the basic ham. Page injected it with brine, using 1 oz of brine per 1 lb of ham. While working, he discussed the common designation of “nitrate free” on meats, explaining that they aren’t necessarily bad for you. Most people don’t recognize that nitrates have been around for thousands of years to prevent bacteria, and are commonly found in foods such as spinach and celery.

The ham was injected with a brine of sea salt, brown sugar, and celery powder that Page made himself. During the demo, Page was asked why he wasn’t trying to get USDA approved, since Rooster St Provisions is limited to selling $75,000 of fresh or raw meat each year to hotels, restaurants, and other institutions, and can’t wholesale any meat that he’s altered, like smoked or cured cuts. Page explained that given the small size of his operations, it would do more harm than good. For instance, he gets his parsley from a guy down the road, where it doesn’t have a bar code. Unless he wanted to start sourcing his ingredients from other highly-regulated places, he wouldn’t benefit from adhering to such strict standards.

The ham was then dipped fully in the wet brine to flavor the outsides before being packed up and ready to go.

The result was a cut unlike any pork we’ve ever had. The slices with their dark color, tougher chew, and earthier taste were much more reminiscent of roast beef.

The third cut for our workshop was the guanciale, or pork jowls.

Page joked that its nearly impossible to mess up guanciale, but recommends you purchase the meat with the glands cleaned off.

He passed around an example of cured guanciale, with its hang weight, date, and later weight over time after curing. When asked about how he did inventory, Page explained that it was on a weekly inventory basis. For instance, he had excess pig jowls at the end of last week. To solve this, Page transformed it into a different product than guanciale and it began flying off the shelves.

The thin strips of meat were smooth and silky, yet tangy and rich.

We concluded with one of pork’s most famous products: bacon. Page made a rub of sea salt, celery powder, and black pepper, but recommended waiting to add the celery powder until the very last minute given its affinity for moisture. For the curing processes, Page advised waiting for the bacon to lose 6 percent of its weight after salting before moving it above a storage temperature of 40 degrees, calling 6 percent a good initial safety standard.

And co-Blog Editor Farrel too!

Neatly cut strips sizzled away in the pan, filling the room with a heavenly porky aroma.

These were by far the best strips of bacon we’ve ever consumed.

Between Stryker Farms and Rooster St Provisions, Penn Appétit gained a comprehensive understanding of pork-raising and charcuterie businesses, and enjoyed delicious samples throughout the course. We left with a newfound appreciation for eating local and supporting small businesses. Seeing the hardworking individuals and humane conditions behind the pork products made us recognize the benefits of buying of meats raised by small-scale farmers and cured by local butchers versus large, mass-processed corporations. This is exactly the type of idea Fair Food strives to promote through its monthly education workshops. If you’d like to find out more about upcoming lessons in their education series, check out Fair Food’s website.