Making Indian for Everyone: an Interview with Anupy Singla 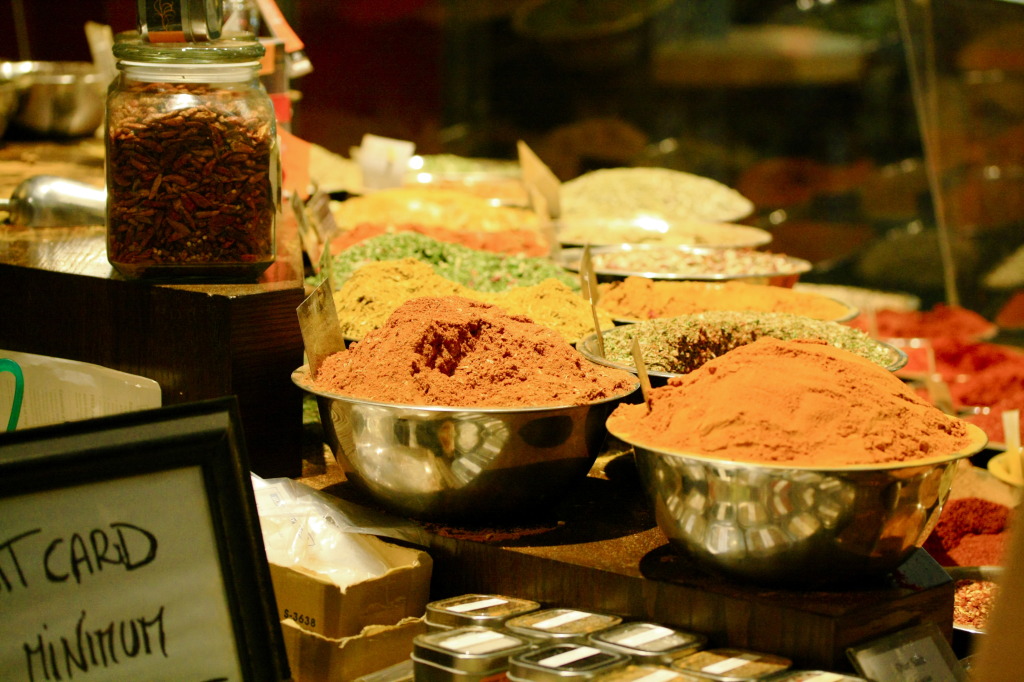 Born in India but raised outside Philadelphia, Anupy Singla brings authentic Indian cuisine to new American audiences with her company Indian As Apple Pie. A former broadcast journalist turned cookbook author and entrepreneur, her commitment to healthy recipes and family-oriented cooking is inspired by her dedication to bring good, authentic food to her two daughters. Singla’s latest cookbook, Indian for Everyone: The Home Cook’s Guide to Traditional Favorites, hit the shelves this past October and mirrors her company’s aim to make traditional Indian dishes accessible to all types of cooks and diets. Penn Appétit got a chance to chat with Singla about her book, her company, and her love of cooking!

What inspired you to change your career from broadcast journalism to cooking?

Anupy Singla: Cooking was something that I’ve always done.  Not a lot of people grow up and say they’re going to write a cookbook on crockpots, but I always wanted to write a crockpot cookbook because my mom raised us on crockpot Indian cooking.  She was one of the first Indians in America to discover the crockpot, and she’d work all day figuring out how to make lentils and experiment making Indian dishes in the slow cooker.  My family was raised on this, and when I had my own kids I wanted to give them the same thing.  But as a morning reporter for a TV station in Chicago, I had such little time to do both. Then one day, I was on a really big story about a jetliner that had gone off the runway at Midway airport.  It was one of the best reporting days that I had, but then I came home and it became one of my worst family days.  My nanny didn’t cook well, and my kids were eating really bad food.  My motto is “every child should have the legacy of really good food,” like I did in my family.  That’s what fueled my decision to take a break from reporting and to channel my energy instead into cooking, particularly writing a cookbook.

How has your family and your culture influenced your cooking?

AS: I grew up in King of Prussia in the ‘70s and ‘80s, and [my family was] one of three Indian-American families in the area.  So being Indian wasn’t something we wore with a badge of honor; we tried to hide it a lot.  Back in those days, it was a tough road, being different in a rather blue-collar community.  Many of my younger years were spent suppressing the food that I ate at home and not sharing it with the outside world.  Yet my family got to a point where we had so much pride in our culture, and I learned to give that to my children as well.  So heritage is a really large part of cooking for me. My grandfather, who came from India, taught me my first recipe when I was 10.  I’m not a professionally trained chef; I call myself a “home cook.”  I traveled around India working with some of the best chefs, many of whom are also not trained but in the kitchens of people’s homes.  I worked with a lot of these kinds of chefs, ones who showcased family recipes but never thought to write them down.  So my goal initially was to preserve the roots of my family, but now it’s become this mission to preserve stories and preserve recipes as a journalist.  It’s been an amazing journey, because I am able to document things that would normally get overlooked or even forgotten.

What is the aim of your company, Indian As Apple Pie?

AS: At the end of the day, Indian As Apple Pie sells spices, sauces, and cookbooks.  But what I really aim to sell through my company is knowledge.  If I tell somebody “I’ve got a great spice blend on my website, and I’d like you to buy it,” I’ll also list three or four other places where they can buy that same spice blend cheaper if they want, and I’ll explain why mine is more expensive.  People have garnered a lot more trust with me because of this.  As a journalist, I don’t feel good making money off of not giving people the truth.  My mission is the complete opposite of that.  As I learn more about cooking, I teach people what I learn.  My company has packaged its products so that it’s a one-stop shop for all things Indian food.  At the same time, we present a mission of honesty and integrity behind what we’re selling.

Looking forward, what goals do you have in mind for your company?

AS: If you look at the way Indian cookbooks have sold, interestingly enough, the numbers have never outweighed those of another cookbook category.  They do really well on the East and West coasts, but they haven’t really gripped the Midwest yet.  If you can find a way to reach people in the good old Midwest where you’re communicating the differences of Indian food in a way that’s not patronizing, you’ll win their hearts!  What I do is work to dispel the myths associated with Indian food that cause many people to say they don’t like it.  For example, a lot of people tell me they don’t like curry.  I say, “Perfect! We don’t even cook with curry powder that often.”  I think that because I’ve been a reporter for so long and covered so many communities, in addition to growing up outside of Philly, my energy and attitude are big draws for folks.  They connect with me because I’m not someone who grew up in India and is trying to bring Indian food to America. I operate on a different platform.  My audience demographic is largely non-Indians that, often, have never tried Indian food before but want the healthy aspect of the spices.  They want to eat vegan or vegetarian, but they want to have real, home-cooked food in the process.  My goal is to grasp the audience in America that thinks Indian food is exotic.  My company is called Indian As Apple Pie because it conveys the reality that Indian food is much more familiar than people think.

How do you provide healthy meals that retain their cultural authenticity?

AS: I’m teaching how to make home-style Indian dinners, which is very different from what people get at restaurants.   This was sort of the “aha!” moment for me because I assumed that the Indian food I eat at home – lentils that are spiced, palak paneer without cream, rice without all the oil, dry okra – I assumed that this was what people were eating.  I didn’t grow up going to a ton of Indian restaurants.  As I started to get out there, however, I realized that the food at these Indian restaurants in America was changing.  But it’s so far from what we eat on a day-to-day basis.  Like naan – it’s not a type of bread that we ever really eat.  We may have it at an Indian restaurant once every few months, but we normally make roti, which is so much healthier and lighter.  Or okra – it’s so often over-oiled in restaurants, but at home we eat it much drier.  When I show people the cooking we actually do at home, they’re blown away.   I stress in my books is that the food is all authentic, but when you’re making it at home just pull back on the red chili powder and oil, and now you have a dish that’s palatable, fresh, and healthy.

Let’s talk about your latest book, “Indian for Everyone.” How did you get the idea to write about the many ways one can make Indian food?

AS: The idea for the book actually came from an e-mail I received from this woman, Angela, who lives in Texas.  I make a point to respond to people’s letters and e-mails myself, even if it gets a little overwhelming at times!  So Angela wrote me saying, “I love your books.  I use them all the time, but I admit there are times when I do want the comfort food of restaurant-style Indian.  Is there any way you can put a recipe like that on your website?”  So I thought, “Why couldn’t I put the equivalent of an Indian restaurant menu in a book?”  The premise of Indian for Everyone is that you can find the chicken masala and samosas, but with each dish I tell you how to first make it the “delicious and indulgent” way and then break down the recipe with tips on how to make it vegan or vegetarian, or how to make it with less oil.  I show you how to bake a samosa instead of frying it so there’s less fat.  I show you which breads are gluten free.  And every recipe is tried and true – I’ve tested all of them with my kids and my husband, which has been great because we do eat differently.  I’ve been a vegan since 1996, whereas my husband is what my kids call “an omnivore.” So I wanted to create a book that everyone in a family could use.  That’s why I called it Indian for Everyone, because everyone can eat happily through this book.

What is your favorite spice blend that Indian As Apple Pie offers?

AS: Our big roll out is our selection of spice blends.  We do have straight spices like turmeric and cumin, but then we have blends such as the chana masala, the chaat masala, all of those.  The blends are everything to me.  I spent two years trying to find the right person to take my spices, make them to my specification, and then dry roast them.  A lot of the Indian spice blends on the market right now are not dry roasted.  They are even coming from India with food dye and additives in them.  Take for example the tandoori masala, which we use to make tandoori chicken.  If you look at all the labels that come from those blends that are sitting on Indian grocery shelves, you’ll find that they all have red dye 40 in them.  So I was determined to make everything that I put out there clean, without any additives or added salt.  I actually have two favorite spices of mine – my chai masala and my tandoori masala.  They’re so authentic and delicious!  A great way to use the tandoori masala is to put it in yogurt with a little bit of regular sea salt, marinate chicken or tofu with it, and put that on the grill. It’s amazing.

What is your most popular dish that you cook at home?

AS: Let me ask my 9-year-old, who’s not supposed to be in the room while I’m doing an interview but still keeps managing to find her way in! (What’s your favorite recipe?) So my 9-year-old and 11-year-old love rajmah.  It’s basically an Indian version of beans and rice.  Another big favorite in my house is the chana masala, which are spicy chickpeas.  It’s an explosion of flavor in your mouth!  The turmeric sauce I use makes it sour, spicy, and sweet all in one bite.  My mouth is watering just thinking about it.