A Trip to Percy Street Barbecue 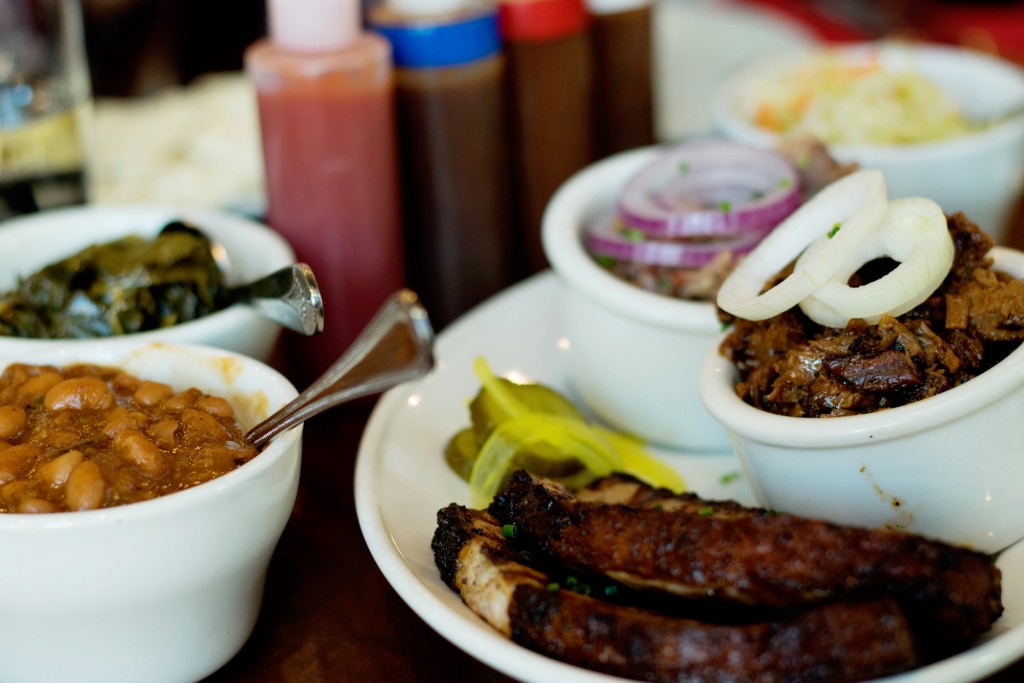 In Center City you may still be hard-pressed to find “authentic” barbecue, but with Percy Street Barbecue’s take on Texas Hill Country-style barbecue, every element that forgoes strict authenticity only strengthens the menu and aesthetic. After six years on South Street, pit master Erin O’Shea continues to impress.

Percy Street’s colorful chalk mosaics and open kitchen lend it a relaxed, friendly atmosphere. Natural light is as abundant in the dining room as the music which, in my experience, ranges from an entire Black Keys album to family reunion hits streaming from a bright jukebox. You won’t see any familiar cafeteria-style trays, but you will find a sophisticated take on picnic table dining, where barbecue aficionados and the uninitiated can meet halfway between an open-air Texas joint and a trendy hipster dining room.

Walking into Percy Street, you first encounter the bar, dwarfed by a giant map of their beers’ hometowns, all in the United States. American beers and whiskeys flood their six-page drink menu, but don’t expect to find any draughts. Canned beers (over a hundred!) rule this bar. But while craft beers shine, don’t expect your waitress to know about any of them. On more than one occasion, I’ve asked for recommendations with general requirements but ended up each time with a familiar domestic. I’ll chock this up to an irregular occurrence, mostly because I don’t go to Percy Street just for a beer. I doubt anyone else that knows the place would either—when you go to Percy Street, you go for the food.

From a red oak smoker comes an array of barbecued proteins, from Central Texas brisket to East Carolina pulled pork. Vegetarians, you’ll be eating a whole lot of fried green tomatoes, but I have a feeling even those are fried in some sort of pork fat. Everyone else, if you’re unsure about which meats to choose, Percy Street regularly offers multi-meat shared plates which both satisfy the desire to try everything and reinforce the idea of Percy Street as a place to gather and share. Most recently, I visited during “Meat Week,” when $45 buys a spread for two, including your choice of three of Percy Street’s meats. After some deliberation, pulled pork, chopped brisket and pork belly narrowly won out over the sliced brisket, chicken and ribs.

Percy Street was highly recommended to me long before my first visit, with particular emphasis on the tender brisket and the smoky pulled pork. While the pork and brisket are consistent with the praise, the pork belly was the surprise hero of the Meat Week spread. In the interest of full disclosure, I had no idea before Meat Week that they offered pork belly beyond their twist on a bahn mi. Under the crisp crust, licks of smoke permeated every drop of the creamy pork fat, and the ribbon of delicate, grill-marked meat fell apart practically at the sight of a fork. Desperately reaching for another slice, I swept three small bottles of tomato-based sauce out of my way, nearly knocking them to the ground. In the spirit of true Texas barbecue, the loss would have hardly been noticed. Every meat on the table remained proudly and deliciously naked.

Side dishes may take the backseat when it comes to barbecue, but at Percy Street they are by no means forgettable. The shared meals featured on the menu include several of their most popular sides; during Meat Week these were collard greens, German potato salad, burnt-end beans and coleslaw. While each resembles their Texas counterpart, southern food die-hards may be a bit disappointed that the potato salad lacks the expected creamy, yellow eggyness or that you can still distinguish individual collard leaves. However, the unfussy simplicity of each dish complimented our table full of carefully smoked meats. Hints of vinegar and smoky bits of pork in the vegetable sides recalled the flavors of the main attraction, adding variety which you may or may not find welcome in an otherwise meat-only affair.

A note on portions in a world where plates of quality food seem to be shrinking: When sides and meats alike arrive in identical tiny bowls, don’t despair. The dishes may look small, but Percy Street seems to have portioning down to a science. If you come hungry, you’ll leave full but probably not with leftovers in hand.

Perhaps the biggest divergence from hill country barbecue is the service. Unlike the characteristic cafeteria trays and picnic style seating reproduced ad nauseum by other Texas barbecue joints, Percy Street opts for an extensive wait staff and tableside service. While always lovely, the multiple tableside visitors are hard to keep up with. Their coming and going doesn’t eschew the familiarity you expect with a waiter somewhere serving up down home charm. But the seemingly endless parade of wait staff isn’t the inconsistency of a busy restaurant. It is a carefully performed dance that offers a glimpse past the canned beer and paper towels hitched to your table; it reminds us that Percy Street means business. It gets to the heart of what makes this barbecue oasis so successful: a consistency in food and service that you can only get from a well-orchestrated team, a casual dining environment operating so smoothly that you don’t notice the business going on around you at all.

Percy Street may be one of few, but Philly isn’t totally devoid of barbecue. Fette Sau and Sweet Lucy’s hold their own, but in Center City Percy Street is unparalleled and hits the mark somewhere between the kitschy but unpretentious fine dining that Philadelphians love and an idyllic Sunday family barbecue in the South.

Why should you go? In a city where pop-up joints reign supreme and dumpster-diving squirrels routinely outlive the restaurants that feed them, it looks like Percy Street is ready for the long haul. Also, you know, meat. This place is an unashamed homage to quality meat.

One thought on “A Trip to Percy Street Barbecue”