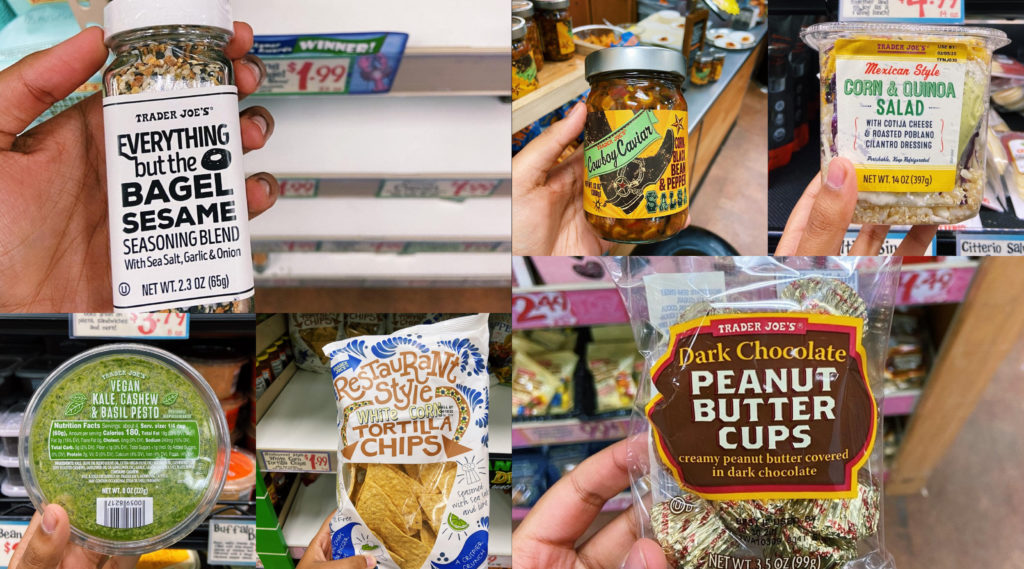 Ah, yes. Trader Joe’s. My happy place. After trying countless Trader Joe’s items, I present to you my master list of all my TRIED AND TRUE favorites (I included the price of each item too!). I’ve repurchased all of the items on this list over and over again, and a trip to TJs is never complete for me without grabbing them. Maybe call that Uber to TJs right now, because you’ll have a grocery list ready by the end of this post.

I have tried many different grocery store pestos and this is BY FAR the best one I’ve had! It’s creamier than any of the pestos sold in jars at other stores and never gets separated and oily. This is amazing on pasta, risotto, quinoa, toast, or eggs.

These chips are a level above the usual tortilla chip. The tortillas are cut a tiny bit thicker than the usual tortilla chips, and the lime adds a yummy kick without being overbearing. The taste is subtle enough to pair great with a variety of dips, beyond salsa. This also happens to be one of the cheapest chips on the shelf at TJs for some reason!

This salsa is super chunky, with a base of black beans, corn, and red bell peppers. Super flavorful and ridiculously yummy. Try it, the flavors really speak for themselves.

You knew this one was coming. Last year TJs released this item, and nothing will ever be the same. Basically, these are just like normal gnocchi, but made with cauliflower instead of potato so they have fewer carbs. My tip? Ignore the instructions on the bag!! Instead, saute the gnocchi in oil/butter of your choice until golden brown and crispy. They become delicious crispy gnocchis with soft pillowy insides. I like these with the kale cashew pesto but they’re delicious with any sauce or even just olive oil and garlic.

Everything But The Bagel Seasoning ($1.99)

This is another classic TJs product that truly deserves all the hype. This seasoning blend makes so many dishes taste delicious. The go-to is putting it on avocado toast, but try it on tofu, chicken, salmon, veggies, soups, or baked in bread too.

I’ll be honest, I normally avoid the pre-made salads at TJs as I’m not the biggest fan. This, however, is an important exception. It’s kind of like an easy to eat version of elote surrounded by other veggies, quinoa, brown rice, a lime wedge, and cilantro poblano dressing. It surprisingly makes a super filling lunch.

I’ve been a loyal Reese’s peanut butter cup fan since I was a little kid, but these are somehow, dare I say it, better. The chocolate is sweeter, the peanut butter is richer and creamier, and they’re relatively so cheap too (8 for $0.99).

This trail mix is made of peanuts, cashews, chocolate chips, peanut butter chips, and dried cherries. It’s super decadent so it’s a snack that honestly doubles as a dessert too.

This is another fantastic low-carb cauliflower item that doesn’t taste low-carb or like cauliflower at all. Toss in your protein of choice and top with soy sauce, and you’ve made a delicious meal in minutes!

One thought on “The Absolute Best Trader Joe’s Items”