History of the Philadelphia Soft Pretzel 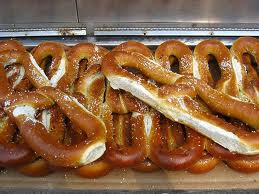 Every city is famous for something, and soft pretzels are to Philadelphia as deep-dish pizza is to Chicago and bagels are to New York. We aren’t talking about your run-of-the-mill, overly processed mall food court pretzels, though. What we’re referring to is the deliciously doughy, chewy, perfectly salted, hearty pretzels topped with mustard found originally in the City of Brotherly Love. Philadelphia soft pretzels are unique because of their shape (a tight figure-eight rather than a large loop with a twisted center and skinny ends) and their texture (chewy rather than crunchy). Philadelphia is said to consume twelve times the national average number of pretzels a year, and although pretzels aren’t what most people normally think of as an interesting food, they’re a classic that can’t be forgotten.

Pretzels were originally invented in Italy as far back as 610 AD, where the earliest reports state that Italian monks used the pretiolas, or “little rewards,” to encourage their pupils to study harder. Soon, the popularity of these treats spread to Austria and Germany, where they became known as bretzels. When the Pennsylvania Dutch immigrated to the United States, they – unsurprisingly – brought their favorite snack with them.

The first American pretzel was supposedly baked in 1861 in Lititz, Pennsylvania. Legend has it that a baker by the name of Ambrose Roth obtained the now-famous soft pretzel recipe from a homeless man after providing him with shelter and care for the night. Julius Sturgis, Roth’s apprentice, loved the recipe and donated several hundred pretzels to Northern soldiers during the civil war “for their aid and comfort.” Commercial pretzel factories sprung up one after another, and today, most of Philadelphia’s soft pretzels are produced right in the city. Famous factories include the Federal Pretzel Baking Company at 6th and Federal and the Center City Pretzel Company at 8th and Washington. Though most pretzels are now machine-cut (unless you seek out hand-twisted ones at Reading Terminal Market), there’s still plenty of heritage and tradition behind them. If you love pretzels as much as we do, be sure to check these places out, especially on April 26, or National Pretzel Day!

One thought on “History of the Philadelphia Soft Pretzel”