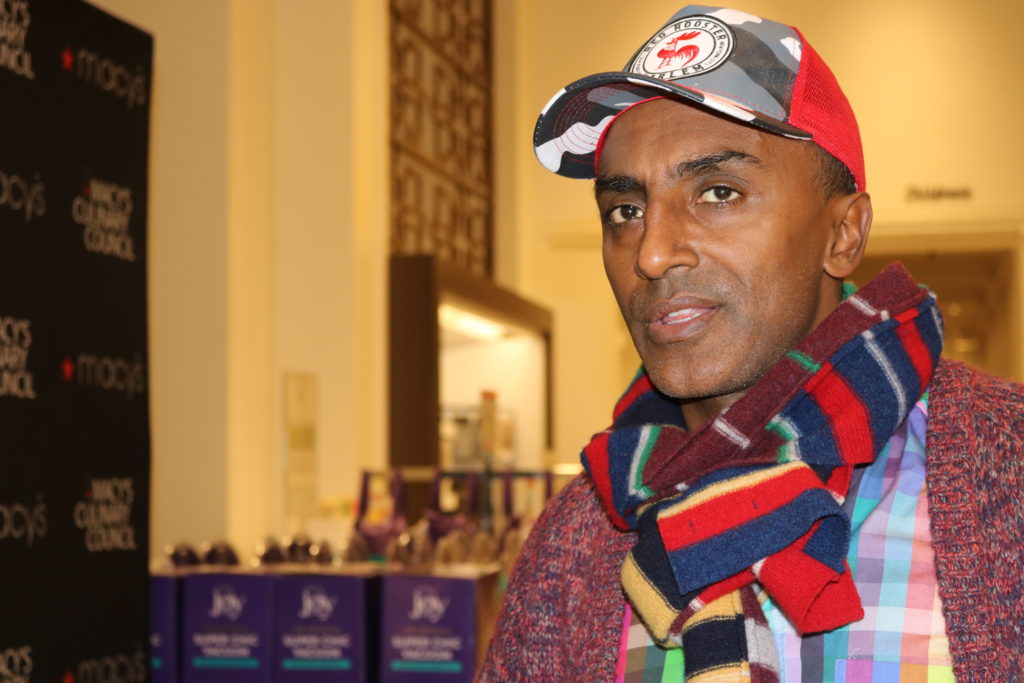 Chef Marcus Samuelsson talks about painting a picture with his food. But his style of painting? Well, after interviewing him at his Philadelphia book signing and reading through his new cookbook, Red Rooster: The Story of Food and Hustle in Harlem, I’d say Marcus is more performance artist than painter.

An immigrant to the US by way of Sweden, where he grew up after being adopted from Ethiopia at age two, Samuelsson opened his Harlem restaurant, Red Rooster, in an attempt to tell the neighborhood’s rich cultural history by way of food.

The menu at Red Rooster is just as eclectic as Samuelsson’s own background. It draws influence from the soul food of the American South, Afro-Caribbean traditions, and even Asian flavors that reflect Harlem’s steadfast Asian population. The restaurant’s staff is just as diverse as the dishes on its menu—a mixture of cooks and servers from different cultures that end up making, as Samuelsson exclaims, “the best Puerto Rican-Filipino staff meals ever.”

“The cookbook is a dive into Harlem’s culture,” explains Samuelsson. The story he’s painting at Red Rooster a combination of the Great Migration, the mass movement of African Americans out of the South during the mid 20th century, and the global migration, which brings new cultures to Harlem to this very day. Open his new cookbook and you’ll find more of the same story. Page after page of recipes for everything from shatteringly crisp fried chicken to curried stews laced with curry paste and fish sauce.

But food isn’t the only medium Samuelsson uses torepresent Harlem at this restaurant, Music, he says, “is also an ingredientof who we are.”

Walk into Red Rooster on any given night and you’ll be treated to live performances of anything from Afro Beat spun by local DJ’s to a full-on jazz performance by The Rakiem Walker Project, a seven piece band that is also accompanying Samuelsson on his nationwide book tour. As Samuelsson puts it, “don’t box food in, because then it’s never fun.”

Food and music go hand in hand, according to Samuelsson, which is why his cookbook also includes a Spotify playlist tailored for each individual section. Whether you’re dining at Red Rooster, enjoying a meal on the street, or cooking out of his cookbook at home, Samuelsson wants to make sure that food and culture are always intertwined.