An Interview With Gunner Gislason 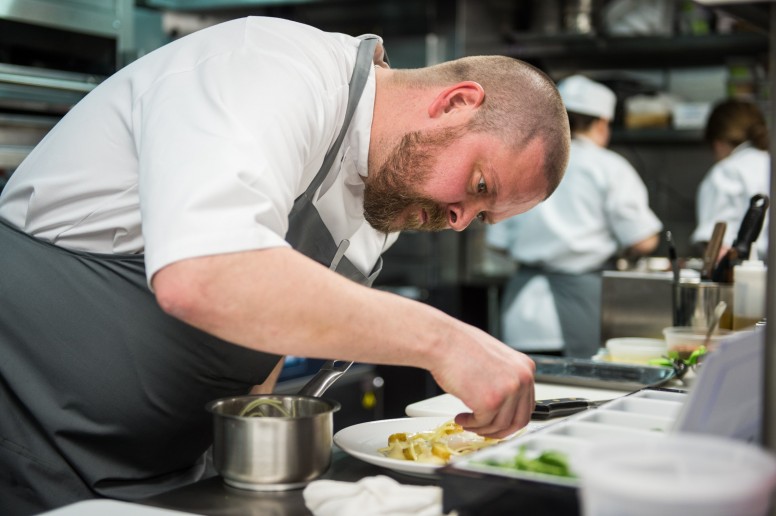 Meet Gunnar Gislason, world-renowned chef and restaurant owner. After opening his restaurant, Dill, in 2009, it has won Iceland’s “Restaurant of the Year” every year until 2016, when he moved to New York with his family to work at Agern in Grand Central Terminal. Under his supervision as head chef, Agern earned its first Michelin Star. In 2017, Gislason went back to his roots and returned to Dill, earning the first Michelin star in Iceland that year.

As I conducted this interview with him, I learned about the secrets of Icelandic food, age-old traditions that have been preserved since the Vikings, and the unique challenges that come with running a successful restaurant in the pandemic. He provided wonderful insight into the incredibly fascinating yet terrifying restaurant industry.

Here are some questions we were able to discuss!

When talking about Islandic food, it’s more about our ingredients than our traditions. We don’t really have a lot of food history and it’s more about preservation than anything else. At DIll, we try to preserve these ancient traditions and techniques, while staying in contact with people that still use them in their daily lives. For example, we make a lot of use of dried fish at our restaurant that really adds a delicious flavor to our dishes. Back in the day, most of the farmers used techniques of preservation such as drying or pickling, to ensure that they made it through the winter, which we have tried to emulate in our food! It’s important to us that we focus on Icelandic ingredients.

Going to New York was very eye-opening, to say the least. The idea for Agern was to use the same philosophy that we use here: to focus on local ingredients. However, in New York, our local ingredients were totally different and all of a sudden I was talking to new farmers about ingredients I was not entirely familiar with. For me as a chef, everything had changed because, for example, something as staple as the butter was different. Even the flavour of the lamb was completely new. It was always so much fun to collaborate with all these new people and sit down and talk about the flavours and menu though.

Moving to New York was most difficult because I started cooking in 1994, so I had these long relationships with the farmers and all these people in the restaurant business in Iceland, but moving to New York was like starting completely new and I didn’t have these connections anymore.

When I started cooking, it was an accident more than anything else, really. A friend of mine told me about this school where we could go to learn the basics of the restaurant business, both in front of house and back of house. My schooling journey till then had not been the best, so I thought it would be a great idea. So, we went for it and I learned that I really enjoyed my time in the kitchen! One of my teachers got me connected with a dishwashing job at a restaurant and I started working there, washing pots and pans, hoping that I would get the chance to help them flip a burger, or toss a salad. I just really enjoyed the atmosphere in the kitchen. In 1994, I started applying for cooking jobs and as they say, the rest is history.

Many years after I finished school and graduated, I worked in Iceland, Denmar, Norway, and Sweden, before moving back to Iceland. Through this journey, I learned that it was very difficult to create something when you were not in charge. I wanted to be able to make the final decision on what to cook and what choices to make. All of a sudden, my friend and I got this opportunity to open our own restaurant in the Nordic House and we just took the jump.

It was a tough decision to make but we decided to go for it. We opened in 2009 and in the beginning there were only 2 of us: he worked in the front of house and I worked in the back of house. We were scared to death that we wouldn’t make ends meet so we refused to hire anyone and would clean all the dishes and floors after closing by ourselves, only to return home in the middle of the night! This was not sustainable however, and we slowly learned from our mistakes.

Another problem was that our main focus was on Nordic ingredients initially, and then we had a crazy economic collapse, so all these ingredients became very difficult to import, and we shifted to Icelandic ingredients quickly, which really transformed our restaurant. I took a drive throughout Iceland to find farmers and fishermen to source from. I was sure that I would find new stuff, but what I was mind blown about was the old traditions that seemed to be dying out. We even wrote a book about it, North. It is full of pictures and recipes from the restaurant, but more importantly about the amazing people that were providing me with the ingredients.

It is full of pictures and recipes from the restaurant, but more importantly about the amazing people that were providing me with the ingredients. I really enjoyed interviewing these people and listening to their stories. Our main focus was to make people fall in love with the ancient Icelandic traditions that transformed our dishes. We did a lot of research, going through old cookbooks and we tried to ensure that pieces of that history went on our plates, even in a small way. For example, we season our plates with black salt, which was created by the Vikings. They used seaweed that they roasted on an open fire and used it as a substitute for salt.

During the pandemic, it is obviously very difficult for foreigners to come into Iceland, which makes it difficult to fill our seats. In Iceland, there’s only about 350,000 people, and there’s only so many people that can eat fine dining very often, so right now, it would probably be easier to have a more casual restaurant at the end of the day, but you just have to be true to what you do!