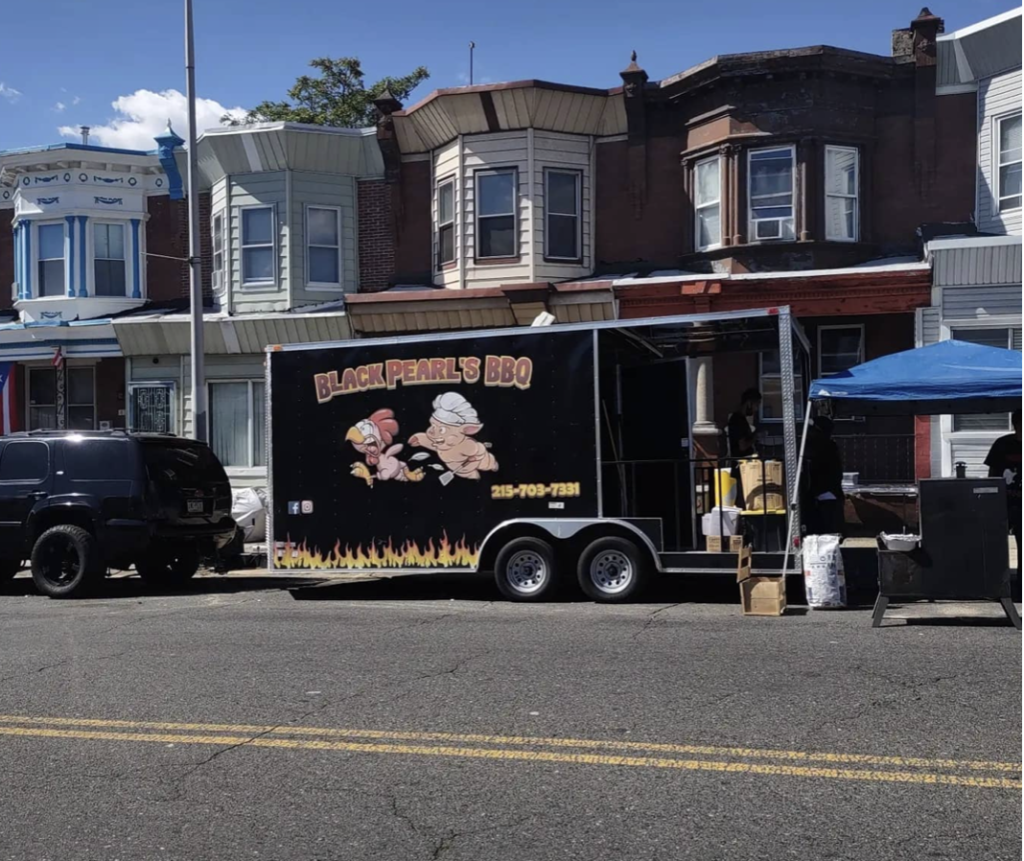 Until recently, if you found yourself within a block of 42nd and Market on a weekend, chances are you would have noticed a subtle scent of smoke hanging in the air. No, the smoke was not coming from a panini press that was left on overnight (that comment has nothing to do with the Hill fire alarm that went off at 3 a.m. in the dead of winter my freshman year). Rather, it was billowing from a gas tank that was turned into a smoker by a metalsmith in Williamstown, New Jersey. Who commissioned said smoker, you might ask? He calls himself “Mr. Mario” and he’s the owner of Black Pearl’s BBQ truck.

Black Pearl’s used to serve its food at 42nd and Market on the weekends, but has since moved to a more permanent location at 2930 N Croskey St.

When you arrive at his spot, Mario will greet you as if you were one of his own, with a firm handshake and booming positivity. A 1988 graduate of John Bartram High School in southwest Philly, he got his start barbecuing at the joint he and his brother opened up in Orlando, Florida, Lillie Pearl’s BBQ, which still operates today in conjunction with Red 13 Cigar Lounge.

Eight years ago, Mario came back up to his hometown when his father-in-law suffered a stroke. He later passed away from Alzherimer’s, a cause Mario was paying homage to with his purple-ribboned sweatshirt when I interviewed him.

Even though his visit to Philadelphia was only supposed to last a couple of weeks, Mario never left, and he opened up his own transportation business, which later counted a local daycare center as one of its clients. Eventually, he found himself employed at the daycare, coordinating its transportation and, later, its food. Mario had worked his way up to serving as a board member and was content with the money he was earning. His wife, Charlene, an insurance broker and notary during the week and Black Pearl’s BBQ team member on the weekends, was consistently pressing him to step outside his comfort zone and start a cooking business, but Mario was always hesitant.

In the spring of 2020, COVID-19 took care of that decision for him. Like so many, Mario was temporarily furloughed from his job, so starting a barbecue business to recoup his income was the natural backup plan.

Mario’s initial opportunity to sell his barbecue came when the manager of the Midas Auto Repair shop at 42nd and Market—a Texas native—said that he could set up shop right on the Midas lot. And so, armed with nothing but a table and a tent, Mario had himself a very successful start. “My first day, when I got home, I had to call my boss and tell him I wasn’t coming back to work.” The now-converted barbecuer had made nearly the equivalent of his biweekly pre-COVID paycheck in just one day.

Now sporting a spiffy (i.e. it’s got flames and hogs on it) new trailer instead of a table & tent, Black Pearl’s is offering up barbecue fare that’s just about as classic as it gets: chicken, beef and pork ribs, brisket, beef sausage, and pulled pork, all with an optional addition of Mario’s homemade sauce. There’s also the half-pound smoked burgers that you can top with even more meat –  particularly scrumptious if you had an exceptionally ~fun~ time the previous night.

The sides mirror this classic trend: mac & cheese, baked beans, collard greens, cornbread, french fries… nothing special, right? No! Not right! The sides at Black Pearl’s get the same treatment as the meats. They are stored in the smoker so that on top of their inherent deliciousness, they are also imbued with the smokiness that you crave when you think of barbecue.

The concept is simple and so is the food, but make no mistake, it’s a labor of love and a passion of patience. Mario starts the cooking process well in advance of service – his meats can take up to 14 hours to cook via his low-and-slow 190-degree process.

Besides my dangerous affinity for his smokey mac & cheese, the thing that endears me the most to this business of Mr. Mario is his mission to not just do well but do good. Beyond striving to give his customers a positive service experience, he does his best to do right and pass that integrity onto the next generation.

On a given weekend, you’ll find several young men – middle to high school aged – working the smoker and the front-of-house operations in the truck. Michael, Ty, Ken, and Mario’s son (affectionately called “Little Mario”) have incredible work ethics, Mario tells me proudly. He brought them onto the team during the pandemic, and he’s been extremely impressed with their ability to learn quickly, moving from cleaning as their main task to now being able to run the kitchen themselves if needed.

Beyond a job, Mario hopes that providing a job opportunity to these boys will teach them the value of taking pride in honest hard work. Beyond that, he doesn’t just provide them with a paycheck; with mentoring from himself and Charlene, the boys have learned the value of saving that paycheck.

“You don’t have to do this,” Charlene says, referring to the barbecue business. “But at least he’s showing them it [working your way to financial independence] can be done.” On top of that, Mario notes, “If they’re here, they ain’t doing something they’re not supposed to be doing.” Oh, what a wonderful place the world would be if we all kept ourselves out of trouble by making barbecue…

Find the Black Pearl’s team slingin’ smoke at 2930 N Croskey Street from 12-5 PM Thursday through Sunday (Mario says that being open on just weekends “gives you time to miss [him]”).