Get on the Same Level: Games & Grub at the Board & Brew Emily Liu
A Guide to a New Franklin Table Nakyung Lee
West Philly Cafe Guide Shreya Subramanian

Food to Watch: Philly’s Guide to the Kouign-Amann 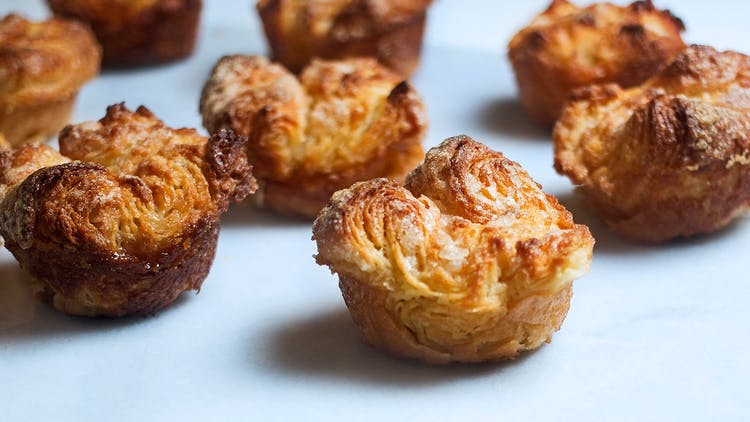 When the pastry world fixates on a new item, it’s analogous to a little kid mesmerized by a new toy. From cupcakes and macarons to cronuts and craffles, dessert enthusiasts have a history of moving on from one sweet obsession to the next. Given this fickle crowd’s past, I’m shocked that they haven’t yet obsessed over the kouign-amann.

I encountered my first kouign-amann a year ago while having brunch at Walnut Street Cafe. Too hungry to wait for our entrees, we decided to order pastries to hold us over. Our waitress rattled off everything that was still available, and ended with “we only have two kouign-amanns left.” Queen who? “They’re like croissants but more dense, and they kind of look like flowers — they’re my favorite.” We might not have known the name, but we gave the queen something’s a chance, and this unknowingly sparked my personal fixation on the worthy pastry.

It’s been described as a dense croissant, a flaky muffin, a bread-y canelé. But today, I put an end to these false equivalences. The kouign-amann (translated as “butter cake” in Breton, a Celtic language from the northwest of France) is a heavy, flaky pastry gilded with butter and caramelized sugar. After taking your first mouth-watering bite, you’ll realize why they sell out so quickly.

Romina Rasmussen, owner of the acclaimed Les Madeleines bakery, explained to Eater magazine, “No one can pronounce it and no one’s ever heard of it, yet they fly out the door.” Truer words have never been spoken. It makes me think that if our waitress hadn’t told us there were only two kouign-amanns left, we may have ordered differently. But to this day, I’m so glad that we didn’t. Maybe it’s the lure of rarity (or maybe it’s the equal parts of butter to sugar), but these things are seriously addicting.

After witnessing the rarity of the kouign-amanns firsthand, it should have been no surprise that my quest for KAs across Philadelphia was met with numerous empty bakery windows and disappointment. I learned the hard way that some places only carry the pastries on certain days, or only offer certain flavors on some days. To protect other enthusiasts from the dismay of the elusive kouign-amann, I’ve compiled this list of where to find the next big pastry in Philly:

Metropolitan Bakery (Rittenhouse) – These KAs are made in-house and have a deliciously thick, crunchy sugar coating. Available only on weekends.

The Kettle Black (Northern Liberties) – KAs available only on Fridays.

Walnut Street Cafe* (University City) – They actually will make KAs upon request, but you have to call a week in advance and order a dozen minimum.

Due to COVID-19, some locations are currently not carrying kouign-amanns* and/or are not open for morning hours**.

One thought on “Food to Watch: Philly’s Guide to the Kouign-Amann”

Get on the Same Level: Games & Grub at the Board & Brew Emily Liu
A Guide to a New Franklin Table Nakyung Lee
West Philly Cafe Guide Shreya Subramanian